Blooms to beat the blues

A few days ago, my son went to retrieve something from my bedroom, and when he returned he said, "Is there a gas leak in your bedroom?" Turns out he's not fond of the strong scent of paperwhites! But they help me beat the winter blues.

There were lots of stories in the news this week about "Blue Monday," declared the most depressing day of the year. But for many people, myself included, feeling "blue" isn't limited to just one day in the winter. So what is the best strategy for beating the winter blues?

At this time of year, holiday festivities have come and gone. And credit card bills just keep coming. With long nights, and short days, the depths of winter can be hard!

When I was recovering from a bout of depression, after we were married (represented by the church charm), I found myself outside, in the Autumn, planting tulips. I had surprised myself. I was surprised because I realized that planting those tulip bulbs meant that I expected to be alive when the snow melted in the Spring. It meant I could actually see that far ahead. I had something to look forward to. I could see the light at the end of the tunnel. Well, even if I could not see the light at the end of the tunnel, at least I believed there was one. Planting those tulips was, to me, a sign of hope. 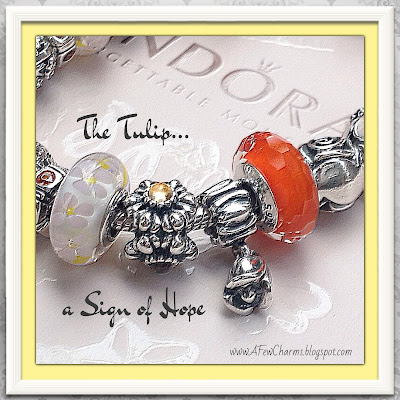 Looking back now, I would say there are two important things I learned from that. The first is that it helps me to have something to look forward to. The second is that flowers make me happy. 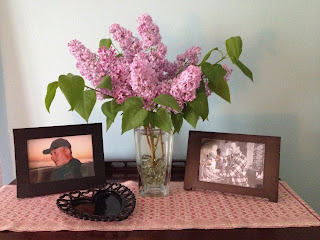 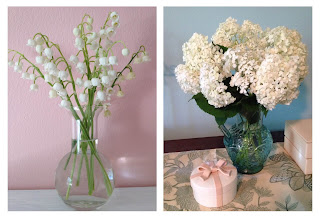 I've always enjoyed bringing in fresh flowers from the garden in the Spring and Summer, but I didn't really realize how much flowers made me happy until I started doing my Wildflower Walks and taking photos of flowers.

When I first decided to make a "Beat the Winter Blues" bracelet, in the Fall of 2012, I knew I needed to include the tulip dangle. It has since been moved to a bracelet I call "Love Blooms Here." So in the middle of our long, dark and cold winters, I try to "Bring in Spring" by forcing paperwhites, tulips, or hyacinth bulbs. And at the very least, I buy a pot of tulips or daffodils when they first appear in the grocery store. 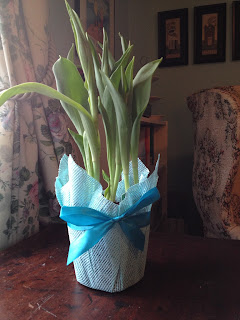 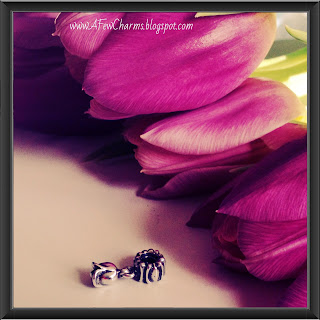 So this year, as my health improved after this most recent bout with depression, I am pleased to say that I found myself in the garden again. In October, before the snow came, I (with help from my husband) planted some daffodils and tulips (and even some iris tubers) so I would have Spring blossoms to look forward to - a symbol of hope to help me beat the winter blues. 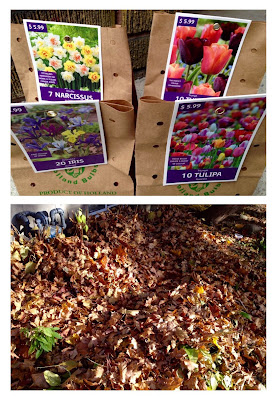 Last year I did a countdown of the twelve days of Christmas but I only got as far as the seventh day of Christmas - must have been a fun New Years! But you can read the stories about how my Beat the Winter Blues bracelet began and why it had the pavé lights and polar bear charms.

Winter usually starts at the beginning of November here in Canada, so there are a number of charms that help me beat the winter blues by reminding me about things I look forward to leading up to Christmas: silver bells, Santa's stocking, tree of lights and Santa's elves and toys.

One of the most important things I do to beat the winter blues is go "walking in a winter wonderland." And the blue daisy charm is about one of my most important affirmations: find beauty every day - even in the depths of winter.

Pandora has an older tulip charm representing international friendship in one of my most popular stories. 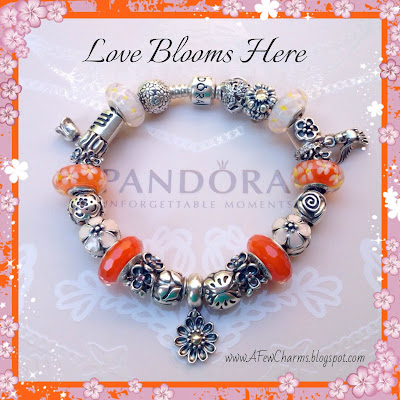 Gold heart T-shirt charm:
I love and accept myself, as I am.

#1 blue ribbon charm:
My health is my #1 priority.

Lucerne dangle and clips:
I deserve to be healthy and happy.

Elegant Embrace spacers:
I can't HATE myself to health; I will LOVE myself to health. I will “embrace” myself with compassion.
True Colours bracelet:
Don't be afraid to let them see your true colours.
Silver rose charm:
Just like the rose, you are perfectly alright as you are, at every stage in your development.

Sacred scarab charm:
Stop should-ing all over yourself.
Treasure chest charm:
Have an "attitude of gratitude."
Dove of peace dangle:
Let there be peace on earth.

Teal studded lights:
Don't take life too seriously.
Open circle pattern:
Open your heart to the circle of giving AND receiving.
Aquamarine tulip dangle:
I am not perfect but I can be a good friend.
Mother-daughter dangles:
Remember what my mother would want me to say to myself: "I was a good daughter, and I am a great mother."
Celebration egg:
It's important to celebrate the little things as well as the big things.
Treasured heart:
I am grateful for that guy.
Treasured heart pendant:
I treasure the time with my kids.
Effervescence muranos:
I will be effervescent when I see my kids.
Let the kids "fly solo" and then congratulate them with, "You so totally rocked! Now gimme some fin!"

Sea star charm:
Be like the star of the sea: strong, flexible and resilient - a survivor!

Dolphin charm:
Face your fears and don't put off living - or chasing your dreams - until you are the perfect weight, shape, or size.
Making waves charm:
Don't be afraid of making waves.
Happy fish charm:
When life gets you down, you know what you got to do? Just keep swimming...
Ribbon flower charms:
Be still. Just float.
Ocean waves charm:
Feel the feelings and ride the wave.
Coral looking glass muranos:
I hope, in my recovery from my eating disorder, to see in the mirror (aka the "looking glass") what I saw on our wedding day, and what my husband sees, every day, when he looks at me.
Mr and Mrs Penguin
I love him and he loves me.
Everlasting love charm:
He will always love me.
Present charm:
Show - and tell our - our partners, "I love you just the way you are."
Rose leaf charm:
Marriage is like a rose garden. You need to dig up the weeds, and water and fertilize the garden, for it to grow and be healthy.
Row of hearts spacer:
Those little gestures of love help us feel closer to each other.
Lighthouse dangle:
The lighthouse can represent the persistence, diligence, and steadfast determination required to keep a marriage strong.
Love letter charm:
Remember to write each other love letters.
Hong bao charm:
We are financially responsible.
Flip-flop dangle:
The prescription for a happy marriage - at least OUR marriage - is foot rubs.

A Quotation for Inspiration

Somewhere over the rainbow
Way up high
And the dreams that you dream of
Once in a lullaby
Somewhere over the rainbow
Bluebirds fly
And the dreams that you dream of
Dreams really do come true
- Norah Jones
"Somewhere Over the Rainbow"
The Story of the Five Balls
Imagine life is a game in which you are juggling five balls. The balls are called work, family, health friends and integrity. And you're keeping all of them in the air. But one day, you finally come to understand that work is a rubber ball. If you drop it, I will bounce back. The other four balls - family, health, friends, integrity - are made of glass. If you drop one of those it will irrevocably scuffed, nicked, perhaps even shattered. And once you truly understand the lesson of the five balls, you will have balance in your life.
- James Patterson
"Suzanne's Diary for Nicholas: A Novel"
Be a clown, be a clown,
All the world loves a clown.
Act the fool, play the calf,
And you'll always have the last laugh.
- Cole Porter
When you find a partner who is stable and committed, trust him/her. Believe that he/she is there for you forever, and will not leave.
- Jeffry Young
"Reinventing Your Life: the breakthrough program to end negative behaviour... and feel great again."
How fascinating, how compelling, how gorgeous the most ordinary thing becomes when you actually see it. How different the world would be if we walked through it seeing what's there. It would be like a wonderland!
- Geneen Roth
Strange isn't it? Each man's life touches so many other lives. When he isn't around he leaves an awful hole, doesn't he?
- Clarence, Angel Second Class
"It's a Wonderful Life"
My Husband, My Lighthouse
He reassures when I am navigating difficult waters
He gives me light in the midst of darkness
He reaches out to me when I am drowning
He keeps me safe when I am in a storm
And he guides me home when I am lost.
- Sheila Holmes
A Few Charms
When we are depressed, or feel guilt or shame, we are living in the past. When we feel fear or anxiety, we are living in the future. We will only find peace if we live in the present.
Offer grace for the bounty of goodness. Raise the song of harvest home, the glass of good cheer, the heart overflowing with joy. We have so much for which to be thankful. So much about which to smile, so much to share... All we have is all we need.
- Sarah Ban Breathnach
"Simple Abundance: A Daybook of Comfort and Joy"
The past is history. The future is a mystery. But today is a gift. That's why they call it the 'present.'
- Bill Keane (and Master Oogway)
I've learned that people will forget what you said, people will forget what you did, but people will never forget how you made them feel.
- Maya Angelou
The curious paradox is that when I accept myself just as I am, then I can change.
- Carl Rogers
We can only be said to be alive in those moments when our hearts are conscious of our treasures.
- Thornton Wilder
Above all, do not lose your desire to walk; every day I walk myself into a state of well-being and away from illness; I have walked myself into my best thoughts, and I know of no thoughts so burdensome that one can't walk from it...
- Soren Kierkegaard